This map shows people who are not engaged with further education or training and have lower-secondary school as their highest level of education as a percentage of the total population aged 18-24 years.

The map indicates variations within the Nordic countries with the lowest rates of early school leaving found in Swedish regions. In six of the eight Swedish NUTS 2 regions (riksområden) early school leavers make up less than seven percent of the population aged 18-24 years. Hovedstaden in Denmark is the only other Nordic region with a similar rate.

In Finland (suuralue/storområde) and Norway (landsdel), variations between the NUTS 2 regions are bigger than in Sweden and Denmark. In the northernmost Finnish region, Pohjois- ja Itä-Suomi (North & East Finland), early school leavers make up a small portion of the population aged 18-24 years, below both the EU average (11.1%) and the two southernmost Finnish NUTS 2 regions. In the Faroe Islands, Iceland, Northern Norway, and, in particular, Greenland, the percentage of the population aged 18-24 years with lower-secondary school as their highest level of education is well above the EU average.

With respect to gender, the balance is fairly even in northern Sweden and northern Norway. All other countries and regions included in the map show patterns consistent with the EU average, with males making up a larger portion of the early school leaving population. 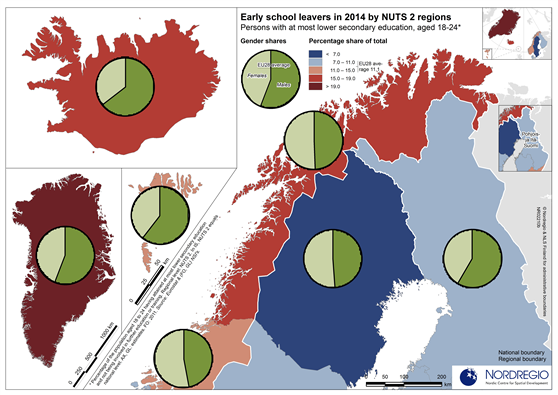