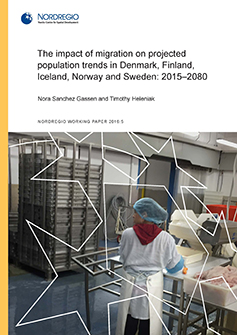 The impact of migration on projected population trends in Denmark, Finland, Iceland, Norway and Sweden: 2015–2080

The population of a country grows or declines as a result of the combination of two trends. One is natural increase, the difference between the number of births and deaths. A number of European countries have been experiencing ‘negative natural increase’ (i.e. more deaths than births) because women have had fertility rates well below two children per woman and older age structures. In recent decades, the Nordic countries have had positive natural increase as a result of having relatively higher fertility rates of just below two children per woman and relatively younger age structures.

Around the turn of the century, the United Nations (UN) (2001) published a report entitled ‘Replacement Migration: Is it a solution to declining and ageing populations?’. It described population decline and population ageing as two critical trends that could have large-scale social and economic implications for the European Union and other regions and countries around the world. Population decline is defined as the shrinking of population numbers caused by an excess in the number of deaths and emigration over the number of births and immigration. Population ageing refers to the increase in the number of older people relative to the rest of the population. It is caused by increasing longevity coupled with declines in fertility (Coleman 2002). Hence, population ageing and decline are the result of trends in fertility, mortality and migration. In its report, the UN investigated the role of international migration in preventing further ageing and population decline in Europe and elsewhere. The UN referred to the respective required migration levels as ‘replacement migration’.

In the European Union (EU), in 2001 consisting of 15 member states1) , the UN (2001) concluded that the population could be kept from declining in size if future migration levels remained stable at the levels experienced between 1990 and 1998. To maintain the size of the working-age population (aged 15 to 64), migration numbers would have to double. Population ageing could only be prevented with migration numbers 15 times higher than those in the 1990s. The large number of immigrants would be necessary because of the rapid ageing of European populations, and because the immigrants themselves would age and need to be successively replaced by younger migrants. This would lead to unprecedented population growth and increase in the proportion of immigrants in the EU. The UN (2001) concluded that immigration may be one strategy to counteract population ageing, but could not be the only solution. The migration levels necessary to prevent population ageing in Europe entirely were considered too high to make this a realistic strategy.