Home > Maps > Oil and Gas in the West Nordic Region

All the Nordic Arctic countries with Atlantic coastline have ongoing oil and gas exploration activity. For Norway the question is mostly to ensure the continuation of regular activities in the time ahead. There are no commercially viable discoveries that have been made in the Faroe Islands, Greenland or Iceland, but expectations of financial gain from oil extraction are high in all the countries. In the Faroe Islands nine wells have been drilled and hydrocarbons have been discovered, but not in commercial quantities. In Greenland oil and gas exploration is today carried out in many parts of the country. In 2015 there are 18 exploration licenses in force and 15 exploration wells have been drilled. Two areas on the Icelandic Continental Shelf are thought to have potential for commercial accumulations of oil and gas. Three licenses has granted for exploration and production of hydrocarbons in the Dreki area in Northeast from Iceland.

Read more about this study

Oil and Gas in the West Nordic Region

All the Nordic Arctic countries with Atlantic coastline have ongoing oil and gas exploration activity. 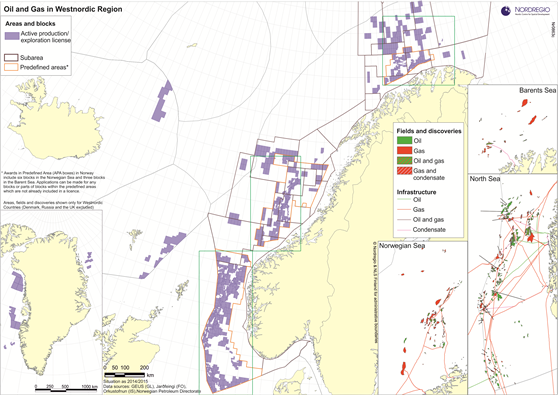