The Vancouver model by Larry Beasley

The Vancouver model: How one community with ideas, passion and disagreements reinvented their city 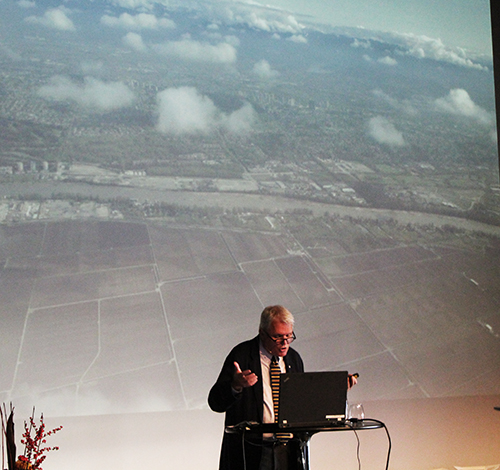 Professor Larry Beasley, Former Director of planning for the city of Vancouver, says that liveability is the foundation for making a modern city marketable and competitive because people and economic activity are naturally drawn to pleasant places. While planning for urban sustainability might be more about an “earth ethic” than market competition, it is the foundation for creating a city robust to its setting, healthy and liveable for people, and attractive for investment.

Enriching Vancouver’s liveability has been nested in two planning imperatives; a hard focus on the consumer perspective – because in a free society a city is shaped just as much by consumer trends as by government laws – and a strong design ethos. City Council and Beasly’s team of planners realized they had to entice people back to the city centre to capitalize on the potentials of its urban realm and to embrace urban density. But the only way they could do that was if the space has a deliberately designed “wow” factor that sets it apart from the suburban choices that had been so pervasive. The City called this formula the “experiential” planning approach, Larry Beasley explains.

Two key elements of the City’s urban development potential stem from a pioneering decisions decades ago. First, the City went against the norm and did not build a freeway bisecting the city. This has provided a basis for limiting auto capacity, building public transportation for connecting emerging town centres throughout the metropolitan region, and for creating infrastructure that promotes walking and cycling. Second, the implementation of the Agricultural Land Reserve preserved vital open space for agriculture while simultaneously promoting compact growth.

Since the late 1980’s, the downtown core of the city in particular, has been virtually reinvented. For instance, it has more than doubled its population to almost 120,000 people in just over 15 years, and that growth continues to this day. From a planning perspective, the starting point was to redesign the basic metropolitan structure of the city-region, which meant putting in place a strong, a visionary and most importantly an integrated land use and transportation framework to guide development. As the city puts it, the best transportation plan is a good land-use plan. The city’s approach continues to be simple and effective: proximity is way more powerful than any other transportation strategy, for the obvious reason that it can dramatically cut the number and length of trips.

In terms of design, the biggest challenge in Vancouver was calibrating density with pervasive efforts for quality of life. To solve this, the City applied a design perspective that prioritized density, mixed land use, community infrastructure, amenity values, and masterful design. The continues to be part of its “living first” initiative, which is a residentially-based urban growth strategy that focusses on complete neighbourhood units. It has the view that consumers make housing choices based on the accessibility to the wide range of services that are essential for their day-to-day living.

“Doing things right still poses some challenges: a popular city undergoing regeneration exacerbates affordability problems for housing.” Beasley noted that this is a fundamental worry with any bold move toward urban densification the nearly uncontrollable impacts and destabilization on existing lower-income areas. This is why Beasley emphasized that a good urban development strategy needs to go hand-in-hand with a good social development strategy; with strong protections built in, is essential to reinforce regeneration, says Beasley. This is why Vancouver’s strategy targets a genuine economic mix of both non-market and market housing in every multiple-family neighbourhood (in these areas, 20% of all units have to be developed for low-income people). Regardless of income, everyone is mixed together, which fosters mutual aid, community-based services and social opportunities. It also includes a mix of unit and household types; including building for people with special needs,seniors and homes for young families. Civic success is not only about design, it is also about the process. Key themes for arranging civic governance and growth management are inclusiveness of the process, flexibility of laws, procedures to satisfy everyone’s needs and mediation among diverse interest. The result in Vancouver has been the “cooperative planning approach” where citizens, developers, and city officials are motivated to joint venture so that everyone benefits.

And of course the issue of financing everything cannot be forgotten. The vision of dense but complete communities in Vancouver’s downtown core has required a lot of amenities, and they have been expensive to develop. Here, the approach has been to implement an understanding of financial sustainability and respect for the longer term development process. Government and business have had to share a bit of the wealth created by the success of the City’s densification. According to Beasley, “We never touch the basic developer production profits – otherwise development would stop – but the extra land value that has been generated can be shared, and if done right it can pay double dividends. Of course, you can guess the problem: how to balance the public objectives and intensive process I’ve been describing with the private market objectives that drive development. How much discretionary regulation will a developer tolerate? Can the amenity benefits be translated into developer profits? Can a complex process be managed so it works for the developers as well as the citizens? After years of watching this, I can now confidently say “yes” – in Vancouver, from the developers and real estate perspective, business has never been better, so developers are cooperative with the system.”

Off the record with Larry Beasley, by Mitchell Reardon from Nordregio
Beasley:

“It’s becoming clear that in many places, the lowest 20% in a city will not be taken care of by the market, and that we need programs to address this. As a city becomes more successful and competitive, and this is true all over the world, and it means that you need to start doing programs to assist middle-income residents as well. And it’s important to start these programs early, before property and land are prohibitively expensive.

In Vancouver, we’ve had a program for a few years where the City gives developers the opportunity for further development in exchange for securing additional units for middle income people as well.

We’re still in the early years of implementing the four prongs of sustainability. The social side is very expensive. Housing is very expensive…In Vancouver, we have a program to access the wealth the whole community to help pay for these needs. The key is to ensure that this doesn’t cut into the developer’s basic profit. But there’s another kind of profit that is unique to development. That’s the kind where additional development is permitted by a City. That profit is the unspoken profit. And if governments manage that properly, developers can gain additional profiting while providing amenities in the area. In Vancouver, all of the amenities, schools, parks, trails and social housing, among others are covered by developers.

Increasingly around the world, people are wanting their cities to be more sustainable. People are understand the relationship between environmental impacts and climate change and cities need to be mindful of that. But part of environmental sustainability isn’t about competitiveness, it’s about creating a environment for our children that is better than the one that exists today. That’s not about the market, that’s not about competitiveness. That’s about our earth ethic.

One thing Vancouver has focused on more than most cities in its successful city-making has been a consumer perspective. And much more than government policy, cities are shaped by the consumer perspective. That’s why it’s so important to make sustainability appealing to people, to achieve broader buy in. When we started our program to repopulate Vancouver’s downtown, we asked: how can we make this popular? How can we reinvent density as one dimension, to be attractive? How can we make density attractive to families with children? To answer this, we talked to thousands of consumers. And that attention to the consumer side created a result that is not only defensible from the sustainability and theoretical side, it’s also very popular.

Can I ‘make’ you live at high density? Probably not. Can I entice you to live at higher density? That has been one of the most important successes that Vancouver can share with the world.

How can we create a model for sustainable suburbs? That’s where the opportunity lies and that will be your generation’s big challenge.”